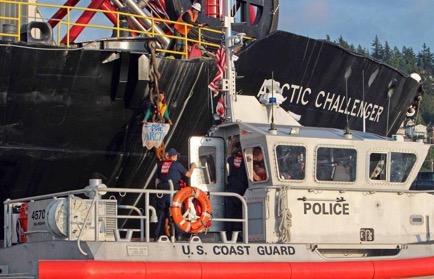 It is difficult to find a more poignant example of the insanity of collective behavior than the determined effort of the world’s largest companies and nations to drill for oil and natural gas in stretches of the Arctic Ocean made ice-free by climate change. When Royal Dutch Shell became amassing a arctic fleet in Seattle and nearby harbors, local climate groups came together to try and block the effort. Chiara and Matt’s was the first in a summer of Shell No! actions that saw the word “kayaktivism” coined and included the dramatic Greenpeace bridge action blocking the Fennica icebreaker in Portland, OR.

Chiara, Matt and two supporters, Chiara’s mom, Debra D’Angelo and Paul Fuller, who captained a support boat, are the only individuals still facing charges from last summer’s Shell No! actions, and the potential penalties are stiff. On Monday, February 29, Chiara faces a Coast Guard hearing on her appeal of a US Coast Guard imposed $20,000 fine. Matt Fuller faces a $10,000 fine plus an additional $3,500 for kayaktivism during the attempt to prevent the Polar Pioneer drilling rig from leaving Seattle harbor.

The fines are issued under a US Coast Guard order creating safety zones around Shell arctic drilling fleet vessels. Lauren Regan, Director and attorney for the Civil Liberties Defense Center, representing Chiara and Matt, has this to say about the process:

"The civil penalties sought by the US Coast Guard against young nonviolent climate activists evidence an unethical collusion between Royal Dutch Shell Oil, a multinational, multi-billion dollar corporation responsible for environmental devastation around the globe, and a federal agency charged with upholding the public interest in protecting our oceans from desecrators like Shell. The newly devised “safety zone” was specifically regulated in order to keep climate protestors away from the Shell arctic drilling fleet, thereby protecting corporate profits over climate survival. In addition, the US Coast Guard now acts as both prosecutor and judge, forcing climate activists into a secret military tribunal instead of a public courtroom, and restricting the defenses and evidence they are permitted to put forth. Shell and the Coast Guard believe that by saddling activists with huge monetary judgments they will chill other people from exercising their right to defend the planet—this effort will fail, but clearly demonstrates the Coast Guard is beholden to the corporate interests of Shell Oil.”

At her hearing next Monday, Chiara and her attorneys will present a common sense defense: faced with rapid deterioration of conditions which make civilization possible, without ay effective means of legal recourse, the only reasonable thing to do is to put oneself in the way.

"We are the people we've been waiting for," Chiara said after the action. "It sounds corny, but it's true. There are these spaces—sometimes really uncomfortable spaces—and it's really important that people who understand the issues of climate change step up and step into those spaces, and say enough is enough."

For more information on Chiara and Matt’s defense, and what you can do to support them, go to their website at coastalguardians.earth.