Clergy Climate Action was launched by Climate Disobedience Center Fellow Rabbi Shoshana Meira Friedman to call faith leaders to show up on the front lines of climate action. The project took shape in the Boston area, with clergy and other religious leaders organizing faithful direct action in collaboration with our partners at Resist the Pipeline.

These local actions provided an opportunity to launch Clergy Climate Action, a platform for clergy and other faith leaders to commit to joining the climate justice movement through nonviolent action. That effort ballooned into a national sign-on letter, with hundreds of clergy pledging to engage in climate disobedience.

Clergy Climate Action joined the effort to bring faith leaders to Standing Rock in early November 2016, and with other partners, we helped to recruit and support 524 clergy from dozens of faith traditions to show solidarity by showing up.

Faith Leaders who sign the pledge and take action are not an organization and have no central governing committee. We are each called by our love of this world, humanity, and the divine as we experience it to lead by example for climate justice. The site provides a platform and resources for faith leaders.

Learn more and get involved at ClergyClimateAction.org. 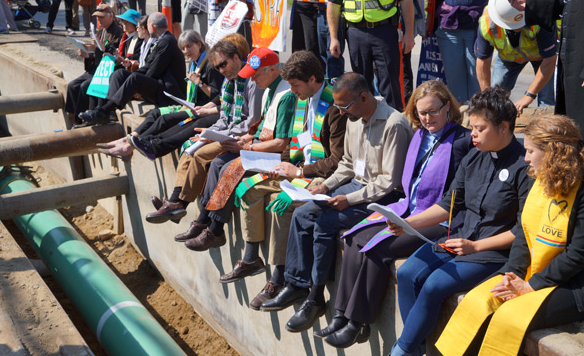