Jay O'Hara is a Quaker and has spent most of his life on Cape Cod. Born to two public school teachers, he studied politics at Earlham College, with a faith that participation in the political system would bring about needed change.

While working in Washington DC, Jay had his moment of climate awakening. Having seen how the political system worked, he realized that change-politics-as-usual are not up to the task of addressing this problem. Searching for an authentic response to the climate crisis and inspired by Wendell Berry, he moved back to his home town of Bourne to ground himself in community and engage in grassroots climate action.

Grappling with gnawing sense of not-being-enough, Jay stepped back from Climate Summer after the first year to search for other avenues of powerful response to the crisis. Turning to his Quaker faith community, in 2011 he co-founded the Young Adult Friends Climate Working Group to provide leadership to New England Quakers. This small group continues to work together to discern how faith leads us to powerfully act in the world, and their work has been called “prophetic” in the New England Quaker community.

In the Spring of 2014 the Young Adult Friends Climate Working Group conceived and led a "Pipeline Pilgrimage" along the route of a proposed fracked-gas pipeline in Massachusetts and New Hampshire. The Pilgrimage successfully proved the value of acting with integrity from the deepest root of our faith traditions to confront the climate crisis.

By 2013, having spent time grounding himself in his faith, Jay responded to a call to bolder action. In 2012, his friend Ken Ward suggested that they together engage in a serious act of civil disobedience. On May 15, 2013 he and Ken blockaded 40,000 tons of coal destined for the Brayton Point power plant with their small white lobster boat named the "Henry David T". The Lobster Boat Blockade became a rallying cry for a campaign of action to close Brayton Point, the largest single source of carbon emissions in New England. In the fall of 2013, the plant's owners announced a plan to shutter the plant.

The story of the Lobster Boat Blockade is featured in the book What We’re Fighting for Now Is Each: Other Dispatches from the Front Lines of Climate Justice by Wen Stephenson.

Jay and Ken were charged with four state charges, and were prepared to go to trial to argue a novel “necessity” defense on September 8, 2014, calling renowned climatologist Dr. James Hansen and 350.org co-founder Bill McKibben to bolster their claim that civil disobedience is necessary given government inaction. Having this novel defense approved by the judge, in a stunning turn of events the prosecutor, Bristol County District Attorney Sam Sutter, dropped and reduced the charges against them, saying that “Climate change is one of the gravest crises our planet has ever faced. In my humble opinion, the political leadership on this issue has been gravely lacking.”

Ken, Jay and Sam then joined together to walk in the People's Climate March in New York City. That fall, Jay and DA Sutter joined together on stage several times to tell their remarkable story.

With the Climate Disobedience Center, Jay continues to work with Quakers and other people of faith to deepen the spiritual underpinnings of powerful action, and to bring the influence of those underpinnings to secular activism to create transformational moments of moral clarity. He currently lives in Vermont. 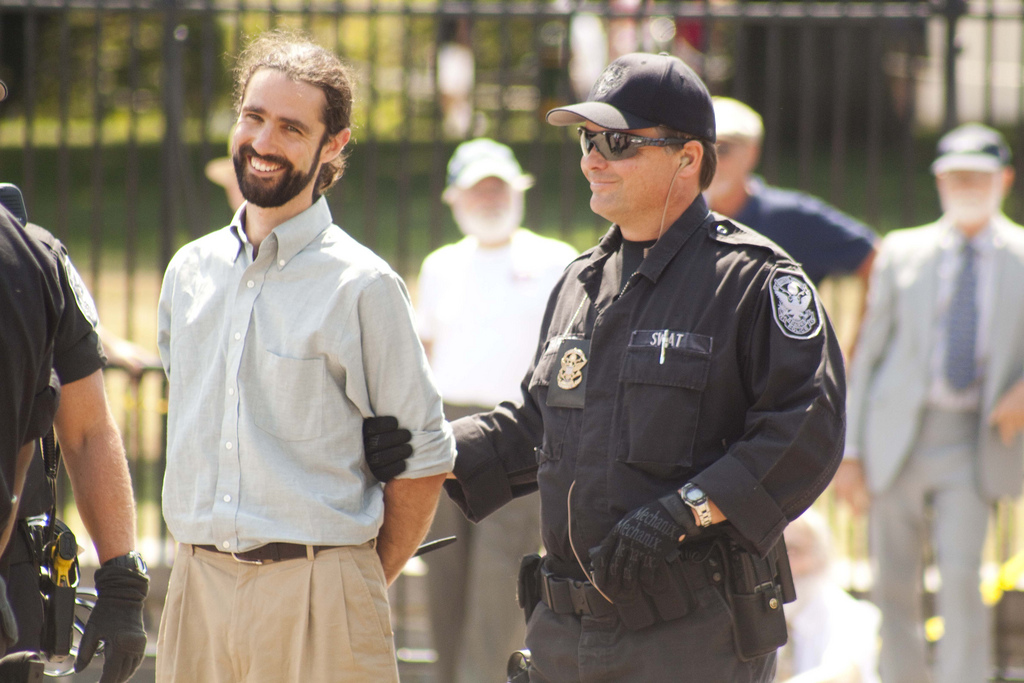