There’s an inherent, and healthy, tension between these two poles: how do we find the powerful, risky thing that opens the door to increasing numbers of people? How do we push the boundaries of action suitable to the times that we’re living in, and not be out there all alone? The conundrum for me, and perhaps for the movement more broadly, is to figure out what the missing ingredients are to enable risk taking among a broader swath of people.

When we do risky things together, the biggest threat to our success, and our continued working together, isn’t the fossil fuel companies or law enforcement: it’s ourselves, our functional relationships and the ability to get through hard times, challenging conversations and impossible odds together. Our greatest weakness is the weakness of our relationships to one another.

If our only relationship - the only force binding us to one another - is strategy, or our fears about climate change that throw us into fits of desperation, we will constantly struggle to hold together and be powerful when challenges arise. 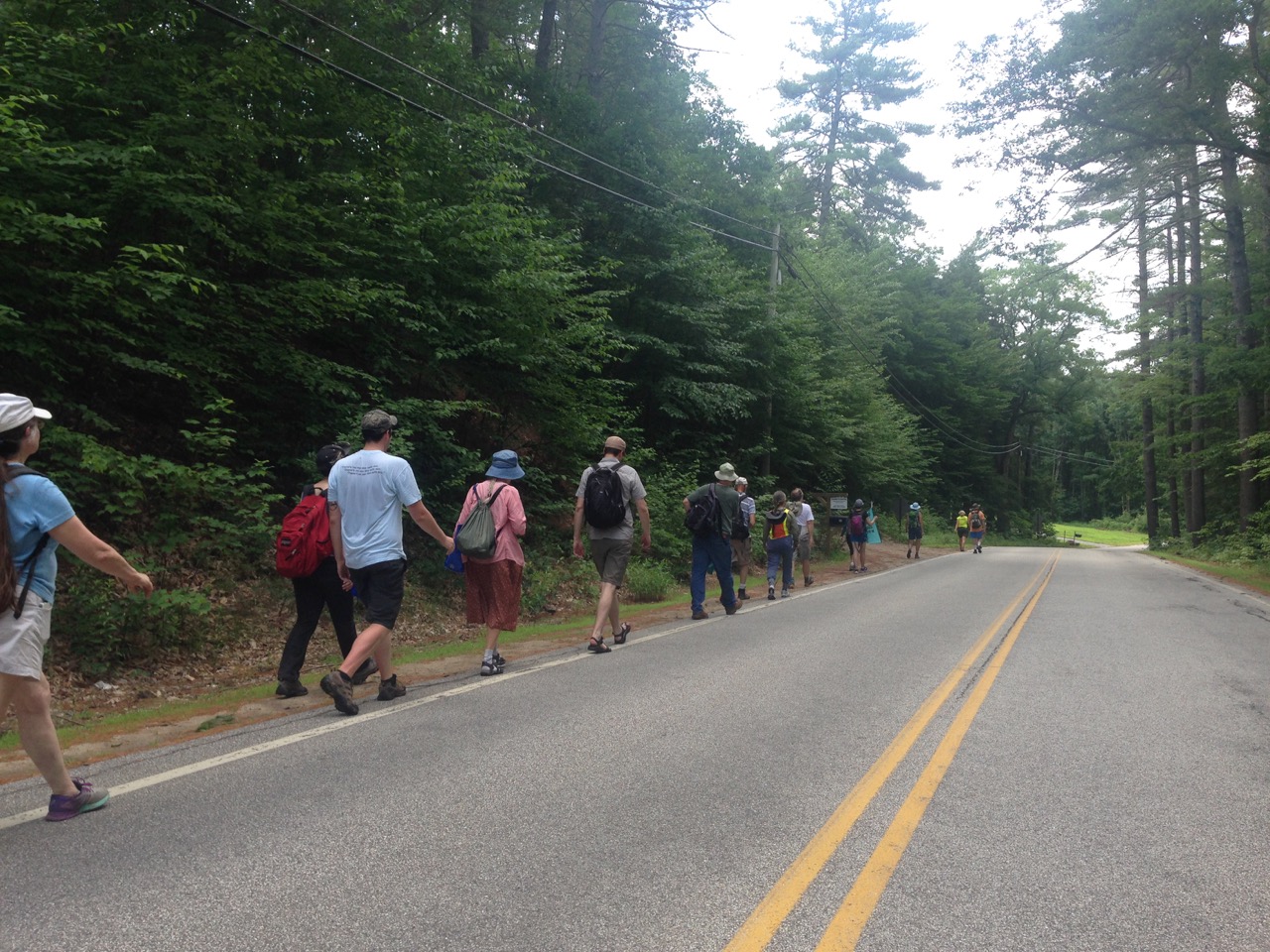 This summer I experienced a glimmer into what a focus on deeper relationship in action looks like. In July, a group of Quakers undertook a week long pilgrimage between the two coal burning plants in New Hampshire, which ended in a 24 hour encampment blockading the train tracks that deliver coal to the Merrimack Power Station in the town of Bow. It wasn’t the most dramatic action I’ve ever been a part of: the single railroad police officer who came to check on us on Sunday morning was there just to make sure he got the facts so he could report them to the railroad corporate executives at their Monday morning meeting. But it did feature a new-ish group of people doing a new thing together. And it was powerful.

On Sunday morning a raft of tensions about leadership, gender and delegation broke through the surface, which had been an undercurrent in conversations the night before. It was hard. I confess that I was at the center of part of that dynamic. (I won’t analyze that here, but let me know if you want to talk about it!) There was yelling, and crying, and a couple of choice expletives were tossed at people. It wasn’t a rift that got healed that day, though we did take some first steps and we seem to be making some progress now.

What was different about it, more than any other conflict I’ve seen in a movement space, was that instead of driving us apart, it made us stronger. There was never a question that everyone in that circle was going to stay in that circle, because we already loved one another. We had just spent seven days walking across southern New Hampshire, sleeping on church floors, sweating like crazy while contending with traffic, dealing with blisters in the rain, finding some refreshing streams to swim in, and getting to know all sorts of parts of each other’s personalities, histories and callings to this work. We had also had ample time, in less stressful situations, to begin to sort out

Some of the people in the group had known one another for decades, others had been acquaintances for a year or two, and others were just meeting for the first time on the banks of the Piscataqua or the Merrimack. Many of them shared a common faith background, but in Quakerism these days that doesn’t necessarily mean much. The bonds of trust and love enabling us to challenge one another to be better couldn’t be replicated by even a full day of nonviolent direct action training. It took real time and real relationships, but the fruits were real, as well. Our decision to break camp after 24hrs was an easy one. 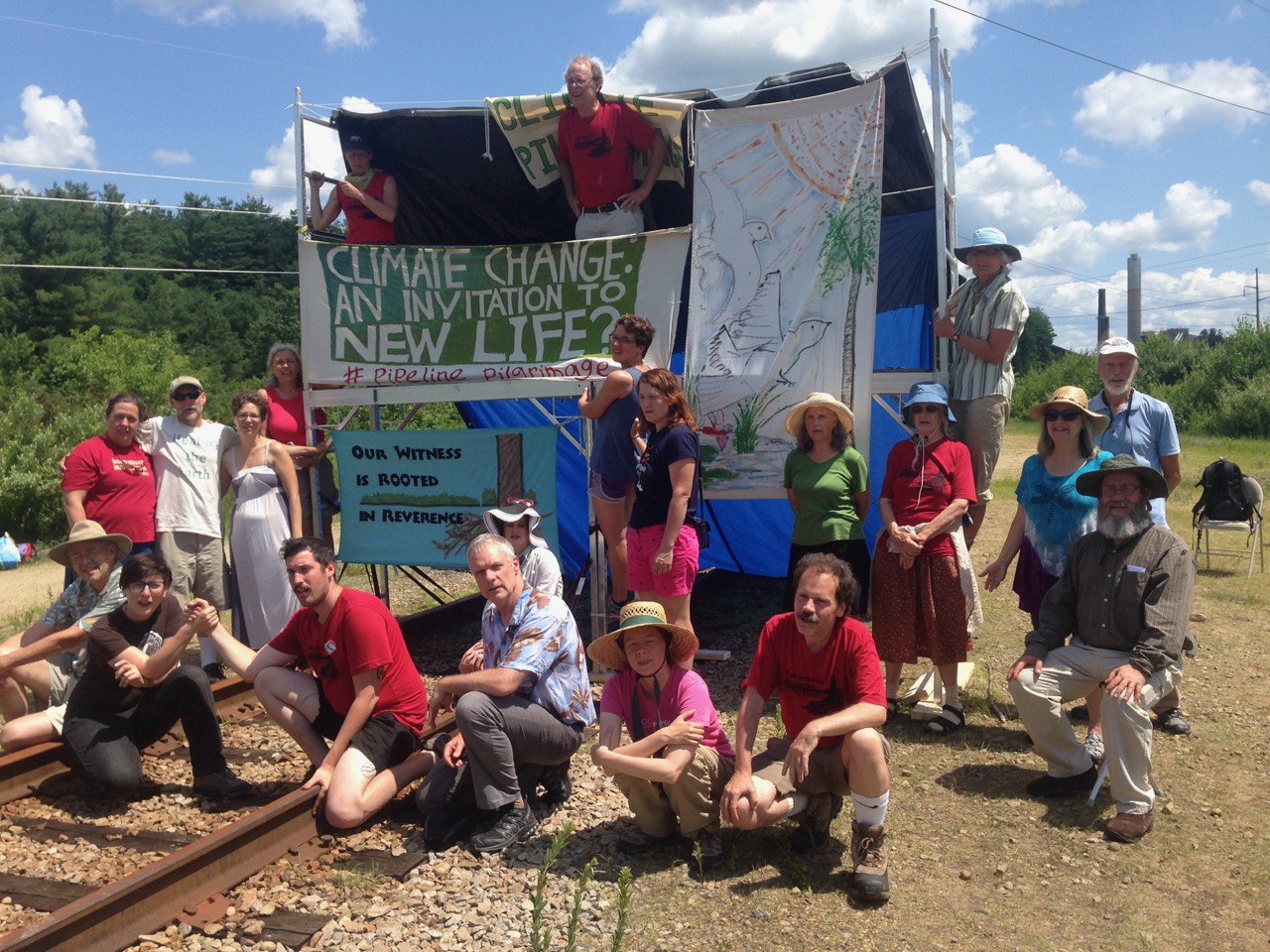 But there were other dynamics at work as well. The Quaker crew, while coming from distant parts of New England and not having worked together on a concrete project like this before, existed in a larger container: an actual community of faith that exists for reasons other than political mobilization. We had a shared spiritual framework, history, language and other common points of reference to draw us together beyond climate change. Rather than collecting autonomous individuals into an action, we were politicizing an existing community into climate disobedience, as Jonathan Matthew Smucker argues is required if a movement is to break out of its self-referential silos (Hegemony How-To, p35).

It is stories like these, politicizing new groups and institutions, and inviting new people into hard-headed climate realist action which get me excited about the direction our new work at the Climate Disobedience Center is going this year. If you’re interested in being a part of the first conversations, and are curious to hear more about the small group community building journey we are beginning, check out our new Community page and sign up.

In the coming months we’ll be sharing more about how this vision fits into our existing work, providing tools for existing communities to come together and focus on climate disobedience, and opportunities for individuals looking to connect to make good on their own movements of conscience. I’m looking forward to this journey.