What is the field? Perhaps you know what I’m talking about: rallies or protests or actions can have different vibes, different feelings or energies present in them. Often the spirit of rallies are “SHUT IT DOWN!” and have the desire to shame (sometimes literally pointing and yelling that word) our opponents. But for many of us that orientation defeats the purpose of active nonviolence; to bring new possibilities into the world that outgrow and out-inspire the status quo.

This lingo of “the field” was developed in our work with the yet-to-be-named-network at the intersection of climate direct action and racial healing. Here’s a snippet from the network's zine that describes the field:

The current response to systems of domination and oppression has largely been to mimic their mode of power. But if we achieve our goal through power over others, we ourselves perpetuate domination and oppression. Thankfully, there are other kinds of power. There is the power that arises between and among people who act together. There is the power that arises within individuals — a spiritual power that transcends the control of ‘power over’ and which isn’t constrained by what seems possible.

We seek an alternative to both a passive objection to injustice which appeals to those ‘in power’, and rageful fantasies that we can overpower the largest, richest military industrial empire the world has ever seen. 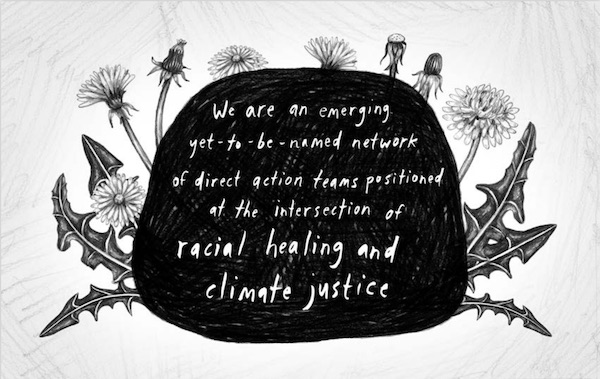 So this walk was an experiment to create a different sort of field. We didn’t chant, we sang. We didn’t sing songs of anger or retribution, but of grief and despair, hope and transcendence. We walked silently for portions of each day and held sacred ceremony. We created spaces that allowed us to show up in our full gifts and power, in our tenderness and vulnerability with one another. We moved at the pace of life, the speed that our feet would take us. We opened ourselves to the unexpected things that emerged, like the elementary school principal who welcomed us into the warm shelter of the school cafeteria the day it was 36 degrees and sleeting out.

Of course at some early points along the walk there were some conversations that questioned the productivity of doing such a walk. What would it accomplish? Was it strategic? Was it the best use of the time of the dozens of people who spent five days of their lives sleeping on church floors and building blisters on their feet? There are two answers to those questions. On the most concrete level, we helped get some legislation moving - helping get hearings scheduled on a fossil fuel infrastructure ban bill. I’m not sure that’s the most important level.

But I’m also convinced that we don’t get to be the final arbiters of what is strategic. Reporter Chelsea Edgar, in her reporting on the walk for Seven Days, captured it in a conversation with fellow walker Sam Bliss:

‘”If I weren't on this walk, I'd just be sitting at my desk, responding to email," he said. We talked about how responding to email has become the new metric of Getting Stuff Done. Were we being more productive out here, walking in the freezing drizzle?’

Humanity has never solved a problem like this. Humanity has never ended the industrial growth society or over thrown the domination system. Part of climate disobedience is taking the risk, and embracing the vulnerability, of not knowing if the work you are venturing upon will have the intended effects that can be measured in traditional metrics of political productivity.

In building a different field, we focus on the sorts of activities that build for a strong movement: deep relationship, long conversations, a building sense of unity and cohesion, a shared culture and emotional intimacy, trust and love. If we build this strength, might we be able to trust that the thing that is needed will emerge from the power that grows among us? Might we dare to hope that we are enough? Enough to get this job done if we lean fully into the part of it that is clearly ours, and build the community of others putting their shoulders to the particular wheel that they are uniquely suited for?

I can’t wait for the next experiment to build the field, and take this same inward power and power between people to disobedient places.