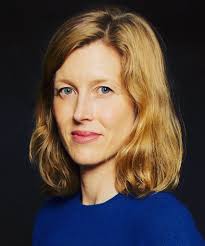 Karenna Gore, a teacher and administrator at the Center for Earth Ethics at Union Theological Seminary and a mother of three.

In June 2016 I participated in gathering at the site of the construction of the West Roxbury Lateral portion of the Algonquin Incremental Market (AIM) pipeline, an fossil fuel expansion project of Spectra Energy that was being installed against the will of the community of West Roxbury and the city of Boston. I joined in the prayers for victims of climate impacts and listened to the songs, the eulogies and other words spoken by local community members who opposed this project. I also participated in discernment with this group, carefully planning a peaceful nonviolent action that would impede the continuation of this pipeline and prompt a public discussion about it. And finally, I walked into the construction site and climbed down into the ditch and occupied it, alternatively sitting and lying down (I recall that the sun was extremely strong and bright when lying down!). When approached by police officers, I explained the motivation for the action and declined to move. Eventually the officers brought the means to remove us from the trench and put us in the vehicle to go to the jail, which I did not resist.

I am concerned about the trajectory we are on, putting more and more global warming pollution into the atmosphere, even as we see that accumulated pollution is already disrupting our weather systems. I feel it is extremely dangerous, for the most vulnerable people in all parts of the world, and for all of our children and grandchildren. It seems wrong to go along is if everything is fine, and yet many of us have put it out of the forefront of our minds because the problem is so big and so pervasive, and the timeframe is not instant. I am convinced that much more needs to be done to raise both awareness and civic courage, and I felt that I was in a position to help others to do that.

We (meaning citizens in a democracy) have the ability to chart of a different course for life on this planet, specifically by making investments in energy efficiency and accelerating our transition to clean renewable energy, but the entrenched power of the fossil fuel industry stands in the way. They are bullies- they have been bullying communities all over the world and they were clearly bullying this American neighborhood. I am interested in the intersection of the climate crisis and the precarious state of our democracy—and this is particularly clear in cases where local communities have rejected fossil fuel expansion but are nonetheless overridden.

I also joined this particular action because it was framed with faith-based and moral language. In my own studies and work, I have been moved by moments when political debates have shifted to moral frameworks (Gandhi in liberating India from the British Empire. Martin Luther King’s words in the civil rights movement, etc.) and particularly when Americans have been compelled to draw on their deepest values and belief to demand civic change. I believe it is this approach that will bring about the change we need to confront our climate crisis, and it is best done in demonstrations of solidarity- both with our neighbors and with people on the other side of the world. Finally, as a mother of three children, I am driven by a desire not only to protect them but to show them that it is better to be on the outside of an unethical system, pressuring it to change, than to continue going along with it.

I live in New York and had recently been a part of opposition to the Constitution Pipeline, which would have run through the Catskills, an ecosystem I know and love. In that process, I learned that the FERC process is highly flawed: a small group of people (sometimes with obvious conflicts of interests) basically rubber stamp these pipelines regardless of harmful impacts or local opposition. I also saw how difficult it is to go against the “natural gas” branch of fossil fuel industry because of the success of their public relations and lobbying campaign to make people view gas as a “bridge fuel” (or even a clean energy source!).  And I learned more about the science behind fracking and methane and became aware of the great harm it is doing to groundwater (and other aspects of the environment) in local fracking sites as well as the immense heat-trapping power of the sizable leaks from these operations and pipelines. We were successful in stopping the Constitution pipeline but it was clear how powerful this industry is—and how skilled they are at subverting the democratic process.

When I learned that the West Roxbury community in Boston had been protesting a fracked gas pipeline and had successfully convinced all their elected representatives to oppose it and that the city of Boston was even suing to stop it, but that the corporation was putting it in anyway, with the conscripted help of local law enforcement officers . . . . I felt compelled to support them. Also I learned about this conflict not only from my friend Tim deChristopher, but also from several women faith leaders I admire who are from Massachusetts—Rev Margaret Bullit-Jonas and Rev. Mariama White Hammond.

I also lived in Boston for 4 years in college, where I studied American history and literature. I love Boston and am familiar with the significance and legacy of this great city in the founding of our republic, so it seemed especially poignant to me that a triumph of corporate rights over local democracy was happening here.

Al Gore’s work, notably Senate hearings in the 1980s, Earth in the Balance (1992), The Assault on Reason (2007) and slideshow presentations

IPCC Fifth Asssessment Report (2014) as articulated by then IPCC chair Dr. Rachendra Pachauri and others

Pope Francis’ Laudato Si: On Care for Our Common Home (2015)

Numerous speeches, presentations and conversations in Paris during COP 21 in December, 2015

Learning from Indigenous leaders in conversations, including at the Religions for the Earth conference at Union Theological Seminary (2014)

Touring frontline communities in the South, including talking to farmers, shrimpers, crabbers, fisherfolk who lived through BP oil spill and Hurricane Katrina

Personal experience with erratic weather, especially more warm days in the middle of winter, and stronger storms, including Superstorm Sandy in my hometown of NYC which blew giant trees down right across the street from my apartment (in addition to all the more serious harm done downtown and in the far Rockaways).

Civil disobedience made a difference in the civil rights movement, from the lunch counter sit-ins to the freedom rides to defying injunctions against public demonstrations, such as Martin Luther King Jr did in the case that led him to wrote the powerful “Letter from a Birmingham Jail.” It has made a difference in many movements to change unjust laws because it unmasks the injustice inherent in the system. There is also a soft power side to the proper exercise of active nonviolence-- the concept of ahimsa that Gandhi lifted up—in that it brings to light a different, non-polarized way of being in the world, and thus opens the possibilities for change. Of course, there are other aspects to social movements, including speaking out in public forums, writing and calling elected officials, going door-to-door to persuade neighbors, working for voter turnout to support candidates for change on the issue at stake, divesting and calling for divestment, boycotts and selective consumption, pickets, open letters, marches, and the like.

The best of the American idea is that the people govern ourselves through an egalitarian process in which we each use our own moral reasoning and make our voice heard. This idea is under threat and strain and we must work harder to restore and reinvigorate it. This time is critical- we really cannot afford to wait or pass it off to others—and the only way to do it successfully is with exponential numbers of people, inviting people to come off the sidelines and join in.

I wrote a book about women who did this kind of work (Lighting the Way: Nine Women Who Changed Modern America, 2006) and I also owe my belief in social movements to their example and impact: Ida B. Wells-Barnett, Mother Jones, Alice Hamilton, Francis Perkins, Virginia Durr, Septima Clark, Dolores Huerta Helen Rodriguez-Trias and Gretchen Buchnenholz. Many of them were arrested, harassed or mocked for being a step ahead of the necessary legal changes that needed to be made in their time, such as stopping lynching, ending child labor, ensuring voting rights for African-Americans, and working for women’s reproductive health care.

I have written op-eds, spoken at rallies, attended marches and protests, organized conferences and workshops, spoken at churches, participated in Bible studies, had personal conversations in numerous venues, and founded an organization called the Center for Earth Ethics designed to educate, convene and assist movement building to confront and solve our ecological crisis.

Here is my op-ed against the Constitution pipeline: https://www.nytimes.com/2016/04/16/opinion/stop-a-pipeline-for-fracked-gas.html

The experience as an American citizen in the aftermath of 9/11 and the lead up to the second Iraq War.

Corporations Are Not People by Jeffrey Clements and other work on corporate rights in this country right now.

Merchants of Doubt by Naomi Oreskes and Eric Conway

The Moral Limits of Markets by Michael Sandel

The lack of meaningful legislation so far in this country, despite the huge risks and increasingly available technologies.

The lack of coverage of this issue in the mainstream media.