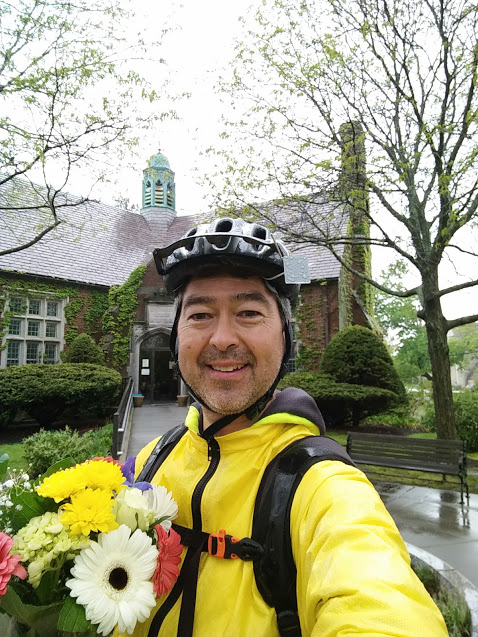 On August 18, 2016, I stepped into the trench with six others and stopped construction of the West Roxbury Lateral Pipeline.

As a scientist; because I know that methane leaks, pipelines fail - newer ones at an even higher rate - and fracked gas damages our health, safety, and climate; as a parent, for the children of West Roxbury, Boston, and beyond, including my own children; and as an educator, for my students at Boston University and students everywhere who are demanding our leadership to accelerate our transition off dirty, unsafe energy to cleaner, sustainable energy.

It locks Boston in to unnecessary, wasteful & polluting 20th century fossil fuel infrastructure for decades when we need to be cleaning up our old leaking gas pipeline system and moving off gas to cleaner, safer energy.

My own research (Phillips et al. 2013; Jackson et al., 2014;  McKain et al. 2014; Hendrick et al. 2016). That of others (Howarth et al. 2011; Jackson et al. 2010; NASA study 2017) shows that fracked gas in not clean nor safe.  Research led by Dr. Curt Nordgaard shows that fracking chemicals and a suite of carcinogens are in the leaking gas on our streets, sidewalks, and in our homes, and that even combusted gas has negative health impacts.  The substantial health impacts of natural gas infrastructure were the focus of a recent symposium I co-organized at BU: http://www.bu.edu/earth/naturalgaspublichealth/

In addition, what I learned about FERC conflicts of interest through reporting of Itai Vardi.  Principally, that FERC accepted Environmental Assessments from a contractor (NRG) to the applicant (Spectra).  This violates universally-accepted standards governing perceived or actual conflicts of interest.

Also, reading the outlandish and alarming projection from National Grid about gas demand expected for Boston over the next 10 years, to be enabled by the West Roxbury Pipelijne, which will not just make reaching our climate action plan targets impossible, but would severely exacerbate climate damage. (Grid-Algonquin Contract pdf).

I learned that the supposed seismic assessment of the blasting quarry was not an actual study but only concluded that no impacts “were expected”. (I need help to find that text).

Also reports that I could not read because they don’t exist - like an emergency safety plan for the West Roxbury Lateral.

Because there is clear evidence that it works.  Exhibit A is the Keystone XL pipeline, which still isn’t built, and whose economic viability becomes worse with every year its delayed by the social movement #NoKXL.  Closer to home, the social movement and civil disobedience helped to put a stop to the Northeast Direct pipeline and Access Northeast pipelines, and are clearly the principal reason why the Weymouth Compressor Station has not yet been built.

I participated in several peaceful vigils and protests to demand answers to safety concerns - and saw that no safety plan was forthcoming, and still does not exist.  I presented information to the Dedham Health Board on the gas leaks my research has uncovered and the significant safety and climate risks of natural gas. I have worked with grassroots organizations including Mothers Out Front to advance Boston and Commonwealth policy to fix gas leaks and use our existing system more efficiently so that we do not need to expand fossil fuel infrastructure when we now must be transitioning off it.  I helped found my chapter of 350 Newton; have been a core member of the Boston University Fossil Fuel Divestment Coalition; was appointed as a member of the BU Climate Action Plan Task Force, and direct the BU Earth House Living Learning Community, whose mission is to relentlessly transition to sustainable resource use, including reduction in the use of fossil fuels and the transition off fossil fuels.

Most academics involved in climate change research have no idea how broken FERC is with such clear conflicts of interest that have been exposed by investigative journalists like Itai Vardi.  I was also unaware of the problem of FERC until I learned about its industry ties and conflicts from climate activists. The corrupted process undertaken by Spectra, NRG and FERC in partnership with National Grid has the imprimatur of law and regulation and I don’t trust it.