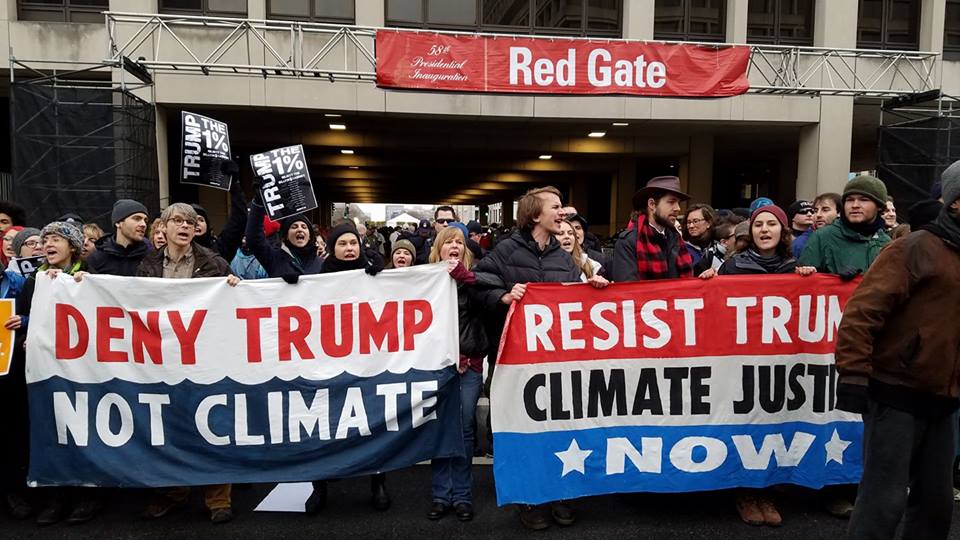 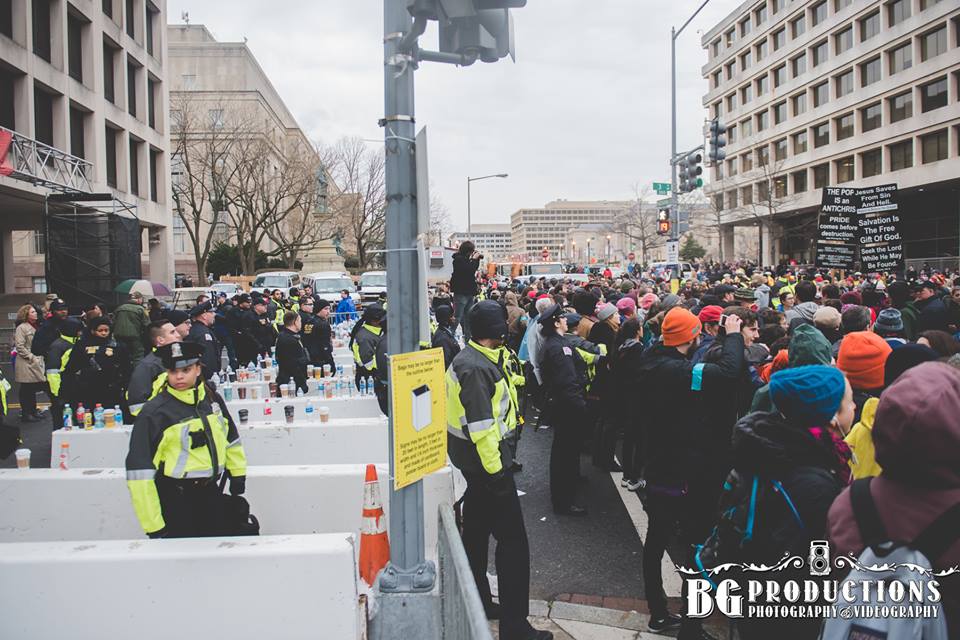 Others simply tried pushing their way through us.  We held our ground.  The folks with linked arms held on to and supported each other, and others of us served as roving de-escalators who stepped in front of anyone who approached us aggressively.  I was one of those de-escalators, and we stayed busy for the next four hours.  Waves of Trump supporters tried to push, elbow, plow, scream, and lie their way through our blockade, but none of them got through.  Again and again Trump supporters thought they could bully and intimidate us, and they were wrong every time. 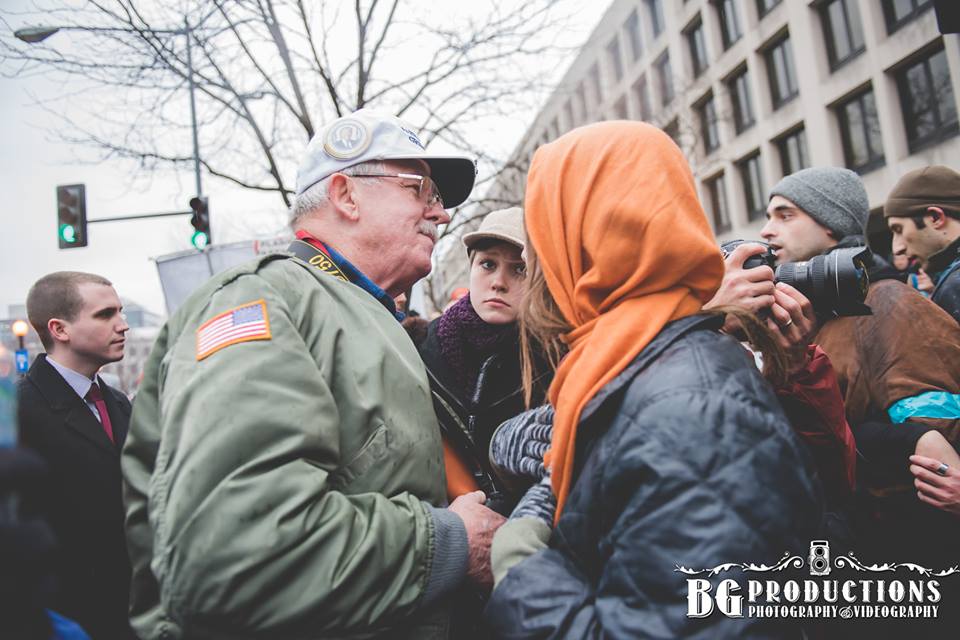 After an hour or two, bikers wearing Harley jackets began trying to push their way through in groups and individually.  We simply clumped up in front of them and continued to hold our ground.  At one point I stepped in front of a man who was at least six inches taller and 100 pounds heavier than me.  He spit directly in my face and screamed at me with spit dripping down his chin.  I felt the people behind me anchor me in place as the man pushed on me with one hand while pointing in my face with his other hand.  I kept repeating, “This is not the way through. You are not going to get through this way.”  After a minute or so of screaming and pushing, he gave up and walked away, and one of the hands from behind me that had held me in place now handed me a bandana to wipe the spit off my face.

A few minutes later another guy in a biker jacket walked up aggressively.  David Turnbull of Oil Change International stepped in front of him, and I stepped directly behind David.  David is quite a bit smaller than me, and the man in front of him was at least 50 pounds heavier than me.  The man immediately started to push David, so I grabbed David’s shoulders from behind while people behind me supported my back.  The man in the biker jacket leaned in and pushed as hard as he could, but David was not going backward.  Instead, David started to slowly lift off the ground as he was pushed from both sides.  David kept his arms by his sides with his palms forward, calmly saying, “I’m not touching you,” and I just hoped that the man would give up before David ran out of air.  The man did give up, perhaps because he felt so foolish being unable to budge someone 100 pounds smaller than himself.

One after another, when the bullies were met with courage, they quickly backed down.  That is how bullies operate.  Their only weapon is fear, and when fear is denied, they are disarmed.  This is what psychology tells us and what my own experience has reinforced.  When I was young and small for my age, I consistently fought back against bullies and found that the bullying stopped even when I lost the fight.  As I got stronger and replaced the bullies in high school, the only thing that shook me out of my shameful behavior was people courageously standing up to me.  My empathy and self-awareness were only aroused when the uglier parts of my nature were no longer fed by fear.

In my senior year of high school, one of my teachers said to me, “You’re a really good person, not because you’re smart or talented, but you’re a good person just because of who you are.”  At the time, I knew she was wrong.  I was a jerk, and my self-loathing, while unhelpful, was not misplaced.  But I knew that I wanted her to be right, and I’ve put a lot of effort since then into trying to live up to her false characterization.

A long list of people could testify that it’s been a slow road for me to become a nicer person.  But I’ve made progress with the patient help of a lot of good people along the way, and I continue to work in that direction.  The day after I witnessed the emergent toughness of the climate movement, I took a challenging step toward becoming a little softer myself.  For the Women’s March in DC, I marched with the Extraordinary Rendition Band, who was joining the Brick by Brick group for the march.  Brick by Brick is a group that wears black and white prison-style jumpsuits with some of Donald Trump’s more misogynist quotes on the bricks of the suits.  They march as a wall, standing together to resist hatred.  I wasn’t planning on wearing a jumpsuit myself until ERB band leader Jess Brown encouraged me to wear one. 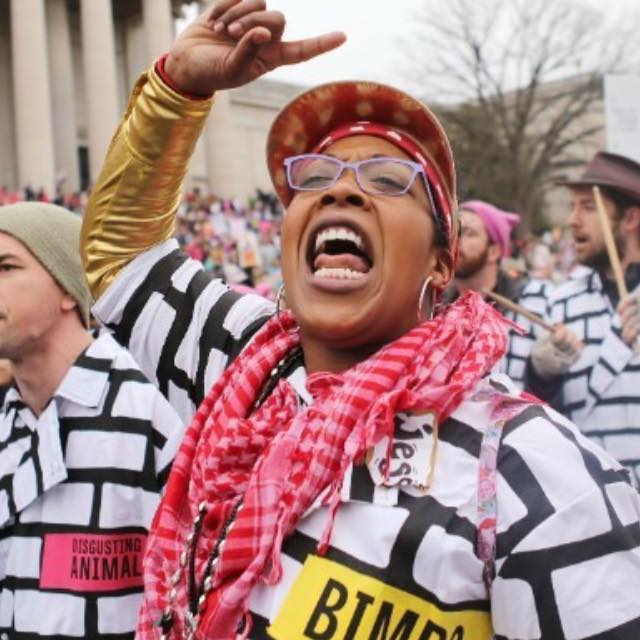 My previous experience wearing a prison-style jumpsuit was of course in prison, where jumpsuits are designed to dehumanize by erasing one’s individuality.  The Brick by Brick jumpsuits were consciously designed to do the opposite, to resist dehumanization by showing solidarity in standing up to hatred.  When I was in solitary confinement in 2012, I was given an orange jumpsuit with un-hemmed legs so long that they extended beyond my toes.  In that solitary unit, the main way to communicate between cells was to send what was called a “kite,” which involved tying something heavy, like a battery, to a string and sliding it out the gap under the bottom of my door and into someone else’s.  Notes or items to trade can be attached father down the string to be reeled in by the recipient.  String was obviously not provided, so I set about making my own from the legs of my jumpsuit.  I would peel off the threads around the bottom cuffs, each about a foot long, and weave three of them together, then tie each end to another strand and keep weaving.  With little to do and plenty of pressure on my sanity, this weaving became a sort of meditative practice for me, as if I was weaving a lifeline of connection out of the fabric of oppression.  Within a few days I had about 75 feet of strong cord, enough to communicate with most of the rooms in my hallway.

As I donned the Brick by Brick jumpsuit, that memory was heavy on my mind.  As one of less than a dozen men among the 120 Brickers, I was unsure about my role and what it meant for me to be wearing those misogynistic words on my clothes.  At times, I was farther outside of my comfort zone than I had been facing the violent Trump supporters the day before.  I never knew what to say, so I mostly just interacted with the ERB band members that I already knew.  But as we marched, sang, and danced through the streets of DC with about a million others, I began to feel how those jumpsuits were weaving a fabric of resistance to Trump’s hatred.  And despite all my imperfections, I could at least help to carry the burden of those hateful words for a day and serve as a strand in the fabric of resistance.  I felt really positive about the day, but I also felt that after 17 years of consciously trying to become a nice person, I still didn’t have it mastered as well as the quiet climate activists had suddenly mastered being tough badasses when they stared down Harley gangs at the Red Gate the day before.

I still believe that we will need to find the toughness to deal with some unthinkable challenges in the near future.  But my experience at the Red Gate gives me the confidence that folks can find toughness in a hurry.  Toughness is easy to find almost anywhere we look in our culture.  We can get tougher faster than we can get nicer.

As we hold the tension between courageously standing up to injustice and kindly taking care of one another, I think that we should err on the side of kindness.  We can get tougher easier than we can get nicer.