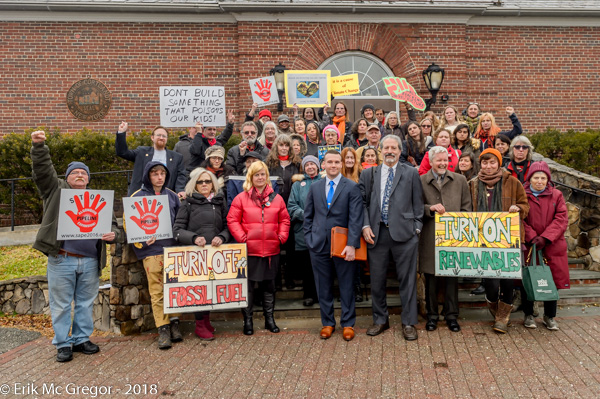 Courtney Williams, an impacted Peekskill resident and member of Stop the “Algonquin” Pipeline Expansion (SAPE) said she was frustrated by the verdict. “That the judge ruled against these water protectors because they had not filed as intervenors is ridiculous. SAPE, Riverkeeper, City of Peekskill, and Town of Cortlandt all filed as intervenors. At the time of the action in October 2016 we were under a “Tolling Order” from FERC. That meant we had no legal recourse, we couldn’t go to the Court of Appeals, but Spectra could build the pipeline. Being an intervenor wouldn't have given Dave, Rebecca, or Janet any more ability to stop the pipeline. They had to act.”

David Publow, a New York State organic farmer and member of Resist Spectra said, “The legal process is always seeking to go for a narrow route. That process is not going to cut a new path for us, but I think we’re cutting a new path for ourselves.”

Justice Ragazzo rejected the Assistant District Attorney’s excessive sentencing request of a maximum fine and 300 hours of community service, instead granting Berlin, Publow, and González unconditional release, explicitly refusing a conditional release on the grounds that it would have a chilling effect on their future activism with no community service and no fines.

“It’s unfortunate that the judge, and most people, still don’t understand how the FERC system is designed to take power away from the people or how we are all part of collective action,” said Rebecca Berlin, a local Yorktown resident. “We are, however, encouraged by her words and her sentencing, both of which show that she understands the AIM Pipeline’s harms and the imminence of those threats.”

According to David Dorfman, the defense lawyer for the three defendants and a professor at Elizabeth Haub Law School at Pace University, “This was certainly not a complete victory, but we were able to fully and completely litigate the necessity defense. The judge appeared to accredit our arguments and expert testimony regarding the harms caused by shale gas, methane emissions, and the dire risk of pipeline explosions, especially near Indian Point. Where we came up short is whether my three clients exhausted legal means to stop the pipeline before resorting to direct action. We disagree with the verdict and we will appeal. Perhaps as importantly, especially for my clients, they did not sustain criminal convictions and the sentence of an unconditional discharge is basically no sentence at all. No fines, no court costs, no community service. Nothing. That’s a great thing. And the fight continues.”

On October 10, 2016, in solidarity with Water Protectors at Standing Rock, the three defendants crawled into a 42-inch diameter steel pipe set to be pulled under the Hudson River near Indian Point Nuclear Power Plant in Verplanck, New York, halting construction on the pipeline for 18 hours.

The Spectra/Enbridge AIM pipeline transports fracked gas from Pennsylvania through New York, Connecticut, Rhode Island, and Massachusetts. The high pressure pipeline runs within 105 feet of critical safety infrastructure at the decaying Indian Point Nuclear Power Plant, endangering more than 20 million people in the New York metropolitan area in the event of a rupture.

During the trial, expert witnesses testified that in addition to its dangerous placement near Indian Point, the fracked gas pipeline already substantially contributes to climate change and exposes the local community to harmful pollutants in fracked gas which lead to an array of health issues.

The defendants also took the stand, testifying that they, along with the local community opposing the pipeline, exhausted all legal remedies before resorting to direct action.They were forced to take action when elected officials, including Governor Cuomo and Senators Schumer and Gillibrand, failed to take real action to stop the pipeline. The action took place after FERC approved the pipeline and construction began, but had halted legal proceedings by issuing a “Tolling Order,” refusing to rule on a request for rehearing that would clear the way for parties to appeal the approval US Court of Appeals.

A risk assessment released by the Cuomo administration in 2018  confirmed the concerns of Resist Spectra and the local community who are still calling on Governor Cuomo to be a true climate leader and shut off the gas in the pipeline.