“This work is LONG, when people take a risk and land in the criminal legal system, they need a community and at least a couple of people who are going to stick with them until they are free. The fact that my time can be freed to do this work means that this work is going to happen until it’s done.” - Marla Marcum

I know you know our dear Marla Marcum, but in this season of gratitude I want to share with you my appreciation for a uniquely Marla role that she has played in the climate justice movement over the past year and a half. Since even before we founded the Climate Disobedience Center in 2015, Marla has put front and center the idea that the action isn’t over until everyone is out of the criminal legal process. And that it’s the community’s responsibility to help see people through the often bewildering jungle of that process, which tries at every step to dehumanize, punish, and strip folks of their autonomy.

I want to tell you how she took organizing that support to the next level for and with activists who joined the fight to block construction of the Enbridge corporation’s Line 3 tar sands pipeline in Minnesota.

If you want to hear this story, and I think you will, read on.

After years of Indigenous-led resistance to Enbridge’s Line 3 tar sands pipeline, construction was nearing completion during the spring and summer of 2021. Hundreds of climate justice activists from all over the country had mobilized to join frontline resistance slowing and stopping construction. Many in the climate disobedience community responded to the call, and Marla was no different. In Spring 2021, she traveled from Tennessee to Minnesota in community with old and new friends to follow the leadership of Indigenous women on the frontlines of that fight. A highlight of her trip was a direct action on May 6, which halted construction for a day in Cass County by preventing Enbridge workers from leaving one of their “man camps” -worker barracks that also serve as a hub for human trafficking that leads to Missing and Murdered Indigneous Women and Relatives.

After other gatherings with Water Protectors, Marla was heading home to Tennessee and got a call from an organizing friend talking about a mass mobilization to Line 3 in the summer, called Treaty People Gathering. This organizer was saying that the legal support team wasn’t ready to handle the huge influx of people from the Treaty People Gathering, and Marla began to offer what support she thought she could muster. 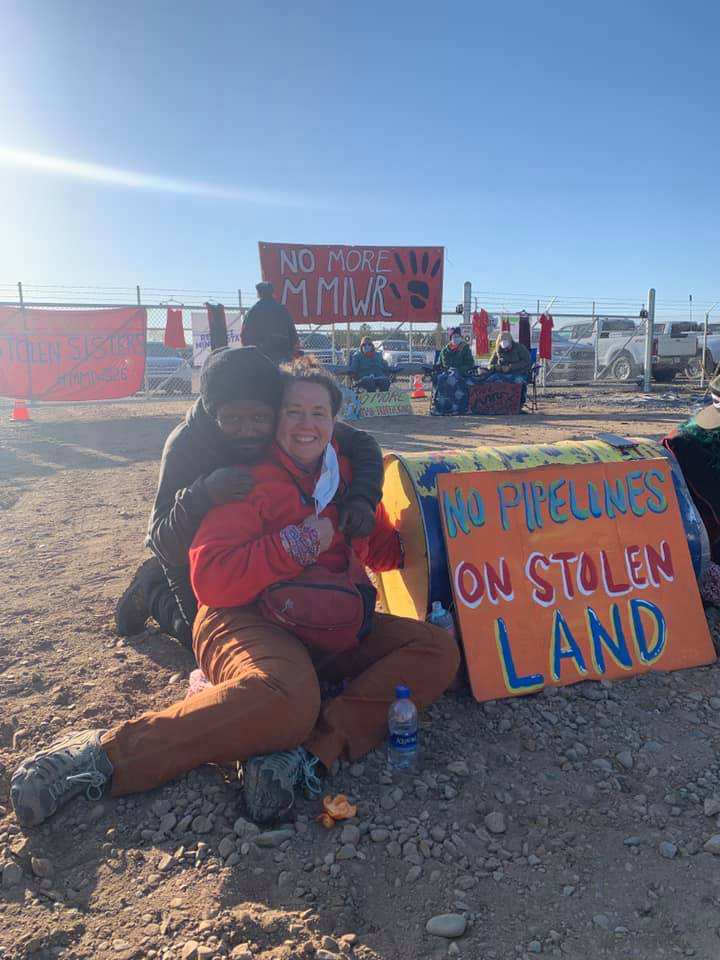 Marla, accompanied by her friend Anthony, stopping Line 3 work with her affinity group  in May 2021.

There are many people working together as the legal support system for Line 3 Water Protectors. Marla is one important member of that big community. One of the gifts the Climate Disobedience Center has to give to this movement is the ability to pivot. We rely support from individuals who believe in our work, and this means we aren’t bound to meet some foundation’s “deliverables.”

Members of the Pipeline Legal Action Network encouraged this remote legal support team, and the systems that Marla put in place for Treaty People Gathering defendants, to extend support to the rest of the Water Protectors facing the courts – over 900 legal cases across the Line 3 resistance movement. With so many cases, it was impossible for each defendant to have an attorney from the moment their action happened. From ensuring that defendants knew when their next court appearances were, to helping them prepare for it, to connecting defendants to legal representation, and creating support groups for defendants to work through the often anxious and emotional turmoil of being in the hands of an arbitrary criminal legal regime, Marla helped build a robust system across the country to show true solidarity with people who took on big risk.

“Marla is an integral part of our legal support team in the struggle against Line 3. It’s not hyperbole to say we would not have been able to accomplish what we have without her work at the Treaty Peoples Gathering and beyond. Her ability to hold and track multiple strands of complex problems is unmatched in my experience. The compassion and insights she constantly brings to our team are beautiful and something I aspire to.” - Timothy Cominghay, Pipeline Legal Action Network

Of course nothing like this happens with just one person. Our network around the northeast, and particularly in the No Coal, No Gas campaign, jumped in feet first. With a huge amount of experience in the legal process, that community staffed a 24-hour support hotline, led trainings and prep sessions before court appearances, and helped track down court records to keep everyone up-to-date. The team created resources for people to act in court on motions before they were assigned an attorney. And, as the campaign wore on, the support team grew to offer a 1-on-1 buddy system of supporters for Water Protector defendants so that people feeling isolated or having worries had someone knowledgeable to turn to and talk about it, prioritizing BIPOC and queer defendants and those who self-identified as having a higher level of legal risk. 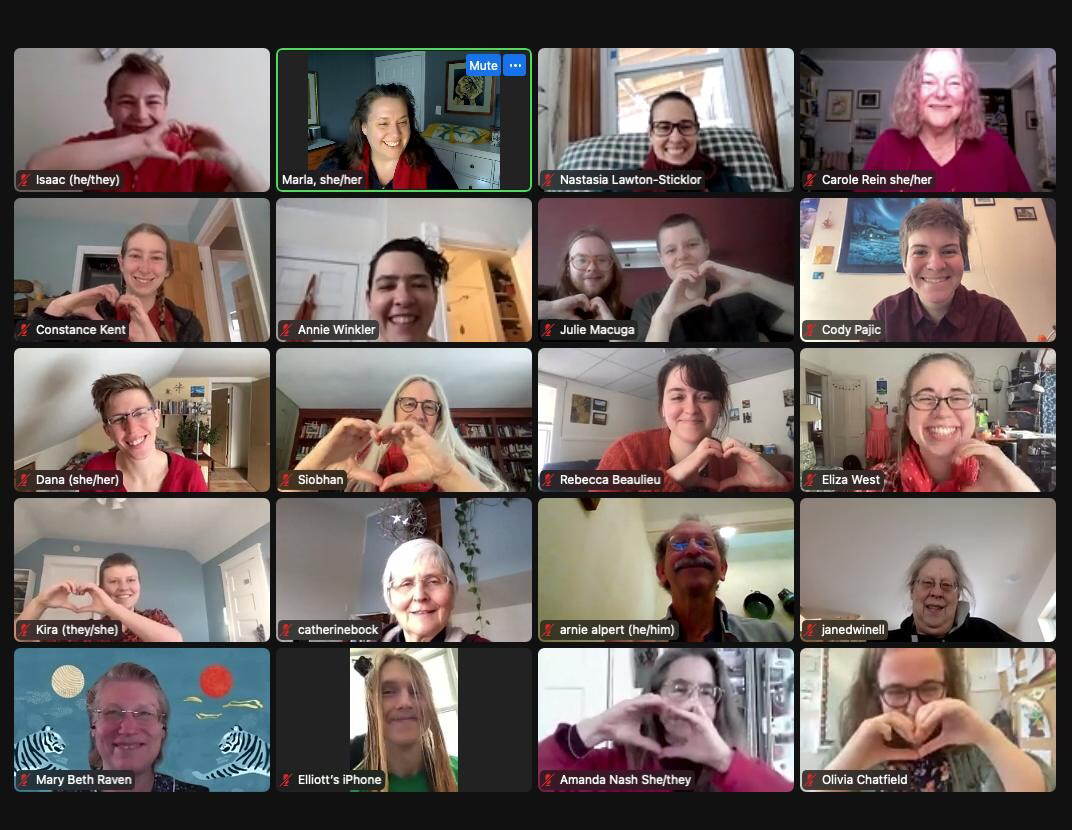 12 Members of our Line 3 Remote Legal Support team gather with others on Zoom for a court support meeting for No Coal No Gas members with New Hampshire charges for direct action.

While much of this system has wound down, the action still isn’t over. There are still 138 open Line 3 cases still in the courts, 10 of which are felony charges. You can help keep this good work going by keeping the Climate Disobedience Center going with a donation today.

Minnesota movement attorney Claire Glenn represents many of the water protectors with open cases in Minnesota. She wants you to know how your gifts to CDC have created a stronger legal support network in Minnesota. “Countless water protectors and activists were moved to protect sacred waters and support the sovereign rights of Anishinaabe people to protect their homelands against Enbridge’s Line 3 pipeline.  When hundreds of people were arrested for doing so, the question became “what next?”  Marla has been instrumental in getting people the information, support, and community they need to navigate the criminal system.  Maintaining solidarity is no small feat in the face of a system built to divide, conquer, and oppress, and it is the work of legal organizers like Marla that literally make solidarity possible and ensure the movement for a better world is sustainable.  Marla has a deep commitment to this work, and an uncanny ability to help attorneys and defendants alike stay true to our higher ideals together in the face of a violent, powerful system.  I am a better attorney for having worked with and learned from Marla, and attorneys cannot do this work well without dedicated legal organizers like her.”

In every action there are people on the sidelines who want to support those who are taking legal risks but don’t know how. When we help those people identify their vocation as a support network we build a larger, more robust and more resilient resistance movement.

Donate to the Climate Disobedience Center