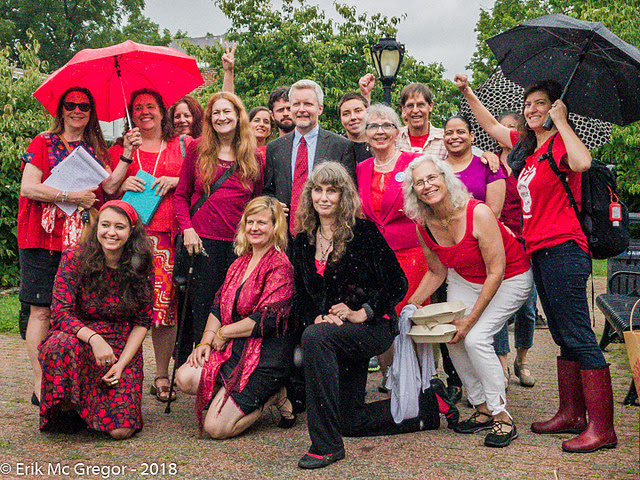 Wednesday was supposed to be the first expert witness testimony, and Thursday, greenhouse gas emissions researcher Bob Howarth to scheduled in court for his expert witness appearance. However mid-day Wednesday it was clear that the trial would stretch on past Friday and the court decided to adjourn until mid-September.

There are many reasons to pay attention to this case, but I wanted you to know something about why this one is very special to me and to all of us at the Climate Disobedience Center.

The ResistSpectra crew spent years fighting the same pipeline that our partners in West Roxbury were fighting. The MA and NY sections of the project were linked by a FERC permit and by the bonds of friendship we developed over those years. Many of their core supporters traveled to be with us in the trenches in West Roxbury, and likewise, CDC and our partners in the West Roxbury Lateral resistance (especially Resist the Pipeline and Stop the West Roxbury Lateral) showed up for our friends in New York. As we fought a high pressure fracked gas pipeline that came within 100 feet of an active blasting quarry in Massachusetts, they fought the same project that sited even higher pressure pipeline within 105 feet of critical safety infrastructure at the aging and failing Indian Point nuclear power plant.

As you know, CDC has added to our focus a commitment to building communities of resistance for the long haul. This means we need to be focused on the relational work that can build the kind of moral and spiritual support that people need when they begin a resistance campaign. It matters when we know that our friends will show up for us when we are facing months in court and that we’ll be supported, even if we face incarceration.

So while we aren't able to show up this week, we hope you'll mark your calendars for the week of September 17th.

And! Show your support on Twitter and Facebook using #ResistSpectra and #climatetrial or donate to ResistSpectra here.

In those years of collaborating with the ResistSpectra crew, I’ve developed some strong friendships with these folks, and while I don’t know all of the current defendants well, two of them are very dear to me, and I know that our movement is stronger for their commitment, creativity, tenacity, kindness, and joyful resilience.

We'll update you on the details in a our next email in a few week. If you want the details sooner, you can watch the event page for the trial and the ResistSpectra Facebook page.

And thank you for supporting climate dissidents near and far!